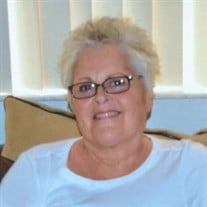 BEDELL, Mary Theresa “Terri” 71, of Bayonet Point, FL passed away August 21, 2020 at Bayonet Point Regional with her loving family by her side. She was born on June 17, 1949 and was raised in Scarsdale, NY. Terri graduated from Scarsdale High School in 1967 and was a member of the Scarsdale Varsity Softball team. She played competitive softball for many years. She also enjoyed crafts, gardening, and her flowers but the thing she enjoyed the most was her family and friends. Prior to moving to Florida, Terri lived in Red Hook, NY where she worked as a data entry operator at the Dutchess County Sheriff’s Office until her retirement. She formerly worked in management at Jamesway. Terri is survived by her loving husband of 34 years who never failed to tell Terri that she was beautiful every day, Harold Bedell; her children Jeffrey Bates of Hudson, FL; and Tami (Lucas) Carlaw of Hudson, FL. She is the loving nana of Thomas, Isabella, and Ryan Carlaw. She is survived by her sisters Rose (Harold) Hill of Stone Ridge, NY; Marge Wilks of Acton, MA; JoAnn (Ed) Edwards of Jupiter, FL; and sister-in-law Theresa Boggi of Chatham, MA. Terri is also survived by many cousins, nieces, and nephews as well as her best friend of 54 years, Patricia Boggi. She was preceded in death by her mother, Louise Capasso Boggi; father Michael Boggi Sr.; Uncle Pat Boggi; brothers Michael Boggi Jr and Anthony Boggi; sister-in-law Marilyn Boggi; and brother-in-law Donald Wilks. Visitation will be held from 5 pm to 8 pm on Friday, August 28th at Grace Memorial Funeral Home. A Mass of Christian Burial will be held at 11 am on Saturday August 29th at St. Michael the Archangel Catholic Church in Hudson, FL.

The family of Mary Theresa Bedell created this Life Tributes page to make it easy to share your memories.

Send flowers to the Bedell family.