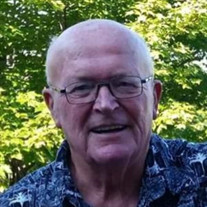 Mr. Lyle H. Bohn, 79, of Port Richey passed away on March 23, 2021. He was born May 18, 1941 in Mandan, North Dakota to the late Harold and Elizabeth Bohn. He is survived by his beloved wife and best friend, Mary; children: Sandra Lea (Dean) Brown; Audrey Ann (Dean) French; Barbara Jean (Garry) Christensen; Gregory Alexander (Kristin Kelly); Mary Ann (John) Strohmayer; grandchildren Timothy (Katie), Heather, Amanda, Jessica, Daniel, Brandon, Chase, Meg, Amber, Alissa, Mary, Sarah, John "Jack", LucyAnne, Grace; great-grandchildren Ava and Scarlett; and many nieces and nephews. He led a life fueled by love of family and friends, and he will be missed by all who knew him. Lyle was the youngest of four children and grew up in Mandan, North Dakota. His high school years were spent at Home On the Range for Boys in Beach, North Dakota. He moved to St.Paul, MN to attend college at St. Thomas University where he met his beautiful wife Mary Keefe and many lifelong friends. He began his career at FMC , and after a decade on Stevens Avenue, they moved to a hobby farm in Princeton, Mn to keep the children busy. His thrifty nature had him setting up a carpool to FMC until he retired, and the big van came in handy to haul all five children around. On the farm he instilled a love for adventure in his children with a variety of animals, motorcycles, vintage cars, and traveling. The adventures were numerous, and Lyle and Mary were able to travel in Europe, drive through Ireland, watch ice bergs crash into the Pacific, and cruise through the Panama Canal locks. His first years of retirement were spent with his brother Doug exploring warmer climates, and he found a spot in Florida and waited for Mary to retire from her nursing career. Senate Manor in New Port Richey brought over a decade of new friends and new adventures that included golfing with Kim, cruises with friends, and hosting visits with family and friends. Their home on the lake in Senate Manor is where his memories are relived with boisterous laughter and shenanigans, a skill he mastered and encouraged with his wit and were forgiven with his smirk. After a successful heart surgery last week, he unexpectedly took a turn the day he was to be released and was released to the Lord on Tuesday March 23. Memorials would be appreciated towards Home on the Range in Sentinel Butte, North Dakota where Lyle fostered his love for education through faith and fellowship. Hotrnd.com

Mr. Lyle H. Bohn, 79, of Port Richey passed away on March 23, 2021. He was born May 18, 1941 in Mandan, North Dakota to the late Harold and Elizabeth Bohn. He is survived by his beloved wife and best friend, Mary; children: Sandra Lea (Dean)... View Obituary & Service Information

The family of Mr. Lyle H Bohn created this Life Tributes page to make it easy to share your memories.

Send flowers to the Bohn family.