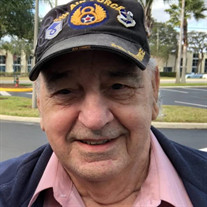 Mr. Leon Floyd Parent, Sr, 82, of Spring Hill passed away on October 7, 2021. He was born March 26, 1939 to Leon and Margaret Parent in Springfield Massachusetts. Leon was a veteran of the United States Air Force, serving as a B-52 Stratofotress... View Obituary & Service Information

The family of Leon Floyd Parent created this Life Tributes page to make it easy to share your memories.

Send flowers to the Parent family.