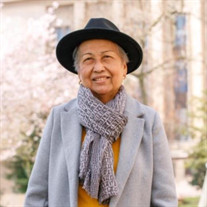 Josefa Cabel Bala (March 19, 1932-October 8, 2020) was the beloved fourth child of Rosa Barba and Bonafacio Cabel, born in Ilocos Norte, Philippines. As a young woman, she studied nutrition at Far Eastern University in Manila. In 1954, she married Clemente Bala, her husband of 58 years. The couple had their first four children near their hometowns in northern Philippines, and in 1965 moved to Quezon City, where they had three more children. Clemente was a physician, accredited in both the Philippines and the United States, and Josefa was a deeply devoted mother and talented seamstress. In October of 1974, the couple moved with the youngest children to the United States, where they first settled in the welcoming community of Brunswick, Maine, and then relocated briefly to Oklahoma, and ultimately to Spring Hill, Florida, where the entire family was reunited. In Spring Hill, she joined the St. Theresa Catholic Church, where she remained involved for many decades. Josefa was a talented and resourceful cook, a deeply caring mother, and a devoted wife. As an immigrant to the United States, she arrived in this country with English language skills and a vastly different set of cultural associations. In Maine and Florida, she endeavored to seek out a community of other Filipinos, who never failed to make life in this country easier and sweeter for the Bala family. While Josefa raised and nurtured her family as they navigated this new culture and new language, she remained closely connected to her siblings and cousins throughout the world. She took pride in the achievements of her seven children and thirteen grandchildren and welcomed them home with joy and delicious feasts for holidays and family occasions. A naturally joyful person, she experienced a number of sadness’s in her life, yet she persisted with strength, faith, and resilience. As adults, her children spoke of Josefa as both their mother and a good friend. Josefa is predeceased by her husband Clemente, as well as her beloved daughter Gilda. She is survived by her children Waldo Bala (Juliet), Rebecca Santos de Dios, Allen Bala (Marla), Imelda Behnke (Fred), Robert Bala (Trina), and Karen Bala (Jessica), as well as grandchildren Jamie Planas; Melissa Wilkinson; Nikki Santos de Dios; Joshua and Emily Behnke; Daniel, Nathan, Karina, and Alayna Bala; Alex, Matthew, and Nicholas Bala; and Noah Bala-May; and great-children Camilla and Viviana Planas; as well as many beloved friends, cousins, nieces and nephews. A Graveside Service will be held at 10AM on Tuesday October 13th, 2020 at Grace Memorial Gardens and Funeral Home, 16931 U.S. Hwy. 19 North, Hudson, FL, 34667, (727)863-5471.

The family of Josefa Bala created this Life Tributes page to make it easy to share your memories.

Send flowers to the Bala family.