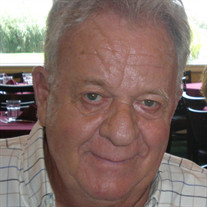 George William Dittmar, fondly known as “BILL”, age 76, of Spring Hill Florida was embraced by Jesus on Saturday May 15, 2021. He will be greatly missed by his wife Angela, his sons Christopher and Michael, his daughter–in-laws Sarah and Nicole, his precious grandsons Jack & Andy and as POP- POP to granddaughter Rayna. He will be greatly missed by his sister Dottie Corbett and his nephew Eric Corbett, his wife Lori and niece Reagan of Knoxville, Tenn.; by his cousins Prissy and Louise and their families of Hancock, New York and by his nephew Joshua. He will be missed by his many friends (especially Jan Borowski, who was like a sister to him) and by his church family. He was a strong believer in Jesus, and was known for his kindness, generosity, and fabulous sense of humor. He is predeceased by his parents William & Dorothy (nee Gorman) Dittmar and his younger brother Robert “Bobby” Dittmar. He was employed as a tree-trimer for the utility company. When there was a blizzard, hurricane, or any other disaster, he was the guy in a tree - in a bucket- with a chainsaw- cutting down the branches so power could be turned back on. While others were sheltered inside, he was the guy in the cold and the heat, “packing a bag” and doing what needed to be done. He was born in Greenville, South Carolina but grew up in the town of Elmsford, in Westchester County,New York. He attended Alexander Hamilton High School. He later moved to Beacon New York, and then to Wappingers Falls, New York. He enjoyed fishing and gardening, and had the most beautiful flowers and tasty vegetables. He enjoyed model railroading and made the most ingenious landscape designs for his model trains. He retired to Spring Hill Florida in March 2009. There will be a celebration of his life on Friday, May 21 at 11 am at Grace Memorial Funeral Home,16931 U.S. Highway 19 North, Hudson, Florida. In lieu of flowers, donations in memory of Bill can be made to Samaritan’s Purse at https://www.samaritanspurse.org/

George William Dittmar, fondly known as &#8220;BILL&#8221;, age 76, of Spring Hill Florida was embraced by Jesus on Saturday May 15, 2021. He will be greatly missed by his wife Angela, his sons Christopher and Michael, his daughter&#8211;in-laws... View Obituary & Service Information

The family of George "Bill" Dittmar created this Life Tributes page to make it easy to share your memories.

Send flowers to the Dittmar family.