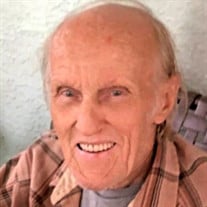 Douglas Freeman Brown, 78, of Hudson, Florida, passed away peacefully, at home Friday September 04, 2020 at 3:50 pm surrounded by two of his loving daughters and 2 dogs after a brief yet brave battle with Mesothelioma Lung Cancer. Douglas was born to parents Beatrice (Haas) Brown and Douglas F Brown Sr, on July 25, 1942, in Boston, Massachusetts. Douglas married the love of his life, Marjorie H (Walsh) Brown on August 31, 1963, in Weymouth, Massachusetts. Marjorie passed away at home on November 04, 2018, Douglas and Marjorie would have been married 57 years this past August; together they raised 4 children. Douglas worked as a Heavy Equipment Operator for 25 years with General Dynamics Shipyard in Quincy MA. Douglas was one of the last of 4000 shipbuilding employees to exit the gates of General Dynamics upon their closure in June 1986. It was then the Brown family relocated from their home in Braintree Massachusetts to Hudson Florida. Douglas held many positions upon his move to Florida including maintenance and housekeeping with Innisbrook Golf Course and other odd jobs to stay busy. He enjoyed puttering the yard, sitting on the back porch sharing long talks and funny stories with anyonen willing to listen, watching neighborhood happenings, spending time with family, his dogs Lexie, Jet, Bella, and the new addition Ivan. He was always seeking treasures at the yard and estate sales. Douglas is survived by his sister Linda (Brown) Ford and her family of Weymouth, his son Douglas Brown, his partner Veronica(NC), his sons Patrick, Bradley, and Joshua. His daughters Deborah, or Debba-Debba as he called her, her husband Scott, and her two sons David and Michael. Melissa, her partner Donald and her two daughters Nicole and Julianna. Meredith, her partner Marc and her daughter Steffanie, or Steffalina as he called her. Douglas was a proud Dad and Grandfather. He was preceded in death by his loving wife, Marjorie H (Walsh) Brown, his parents Beatrice S (Haas) Brown, and Douglas F Brown Sr of Weymouth Massachusetts as well as his brother James K Brown of Quincy Massachusetts. The family expresses great love and appreciation to Doug's daughter Meredith and Granddaughter, Steffanie for taking loving care of Daddy as his primary caregivers. Also, we thank Hernando Pasco Hospice and Melissa Lee Muise for their attentive care. Douglas, Doug, Dougie, Mr. B, Pop, Pops, Popadoodle, Grandpa, Dad, Daddy, Daddy-O will be missed by his children, and all that came to know him. He will continue to hold a special place in our hearts. The family has entrusted Grace Memorial Gardens of Hudson Florida with the arrangements. A Grave Side Ceremony presented by the children of Douglas is scheduled for Monday, November 2nd at 11:00 am with a casual reception to follow at the Family home in Hudson Florida.

Douglas Freeman Brown, 78, of Hudson, Florida, passed away peacefully, at home Friday September 04, 2020 at 3:50 pm surrounded by two of his loving daughters and 2 dogs after a brief yet brave battle with Mesothelioma Lung Cancer. Douglas... View Obituary & Service Information

The family of Douglas Brown created this Life Tributes page to make it easy to share your memories.

Send flowers to the Brown family.