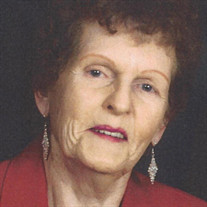 Sylvia Marguerite Stark resided on Culbreath Road since 1995 in Brooksville Florida. She was born in Boston Massachusetts on November 5, 1929. Parents were the late Sidney and Edith Lewis of Dover New Hampshire. She was married to the late Paul Stark for over 50 years. She is survived by five children, Sandra Dominguez of Williamsburg, Virginia, Lois Shelley of Landisburg, Pennsylvania, David Bradley of South Berwick, Maine, Jane Canfield of North Berwick, Maine, Daniel Bradley of Brooksville Florida and a step-son Stephen Stark of North Berwick, Maine. She has 9 grandchildren 4 step grandchildren, nine great-grandchildren, 8 step great-grandchildren and one great great grandchild. Her two brothers were the late Kenneth Lewis of Glastonbury, Connecticut and Bernard Lewis of Stratham, New Hampshire. A homemaker and retired for several years she had been employed in Dover, New Hampshire at Davidson Rubber Company for about 15 years. She attended schools in Dover, New Hampshire but was a graduate of Spaulding High School in Rochester, New Hampshire. She was committee chairman for Boy Scout Troop #313 for several years in Berwick, Maine and was the first trained female scouter in New England. She also was a volunteer at the Berwick, Maine library and in that town served as a pole clerk and the leader of the diet group the “winning losers” and was chairman of the Berwick town Bicentennial picnic in 1976. Several of her poems have appeared in publications and two stories she composed were in national magazines. She loved to play the piano to entertain her children. As a member of the United Methodist Church of Berwick, Maine, she was chairman of the administrative board, president of the United Methodist Women, chairman of the Nurturing committee, chairman of the church communion committee, was publicity chairman for church activities, was one of the first women ushers and served on the “counting” committee. She and her husband Paul were the visiting team to hospitals and nursing homes for the church, upon moving to Brooksville Florida, where she became a member of the First United Methodist Church of Brooksville Florida where she sang in the choir and was secretary and then chairman of the United Methodist Women's Joy Circle, was a member of the UMW executive board, a member of adult Bible study and member of the Forever Young club of the church. She was a volunteer at the Brooksville Regional Hospital and member of the Audubon society, and the Good Sam RV club and the Escapees RV club, AARP and sunshine chapter of National United Methodist campus. Recent years she was a member of the Wesleyan Church, While an Elk member of Lodge #2582 she was their publisher for numerous years, having obtained recognition as both Elk of the month and Elk of the year.

Sylvia Marguerite Stark resided on Culbreath Road since 1995 in Brooksville Florida. She was born in Boston Massachusetts on November 5, 1929. Parents were the late Sidney and Edith Lewis of Dover New Hampshire. She was married to the late Paul... View Obituary & Service Information

The family of Sylvia Marguerite Stark created this Life Tributes page to make it easy to share your memories.

Send flowers to the Stark family.