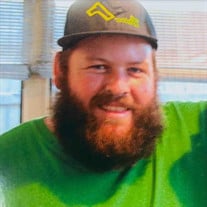 Mr. Ryan Eugene Clark, 34, of Hudson, passed away August 23rd of 2021. He was born September 15th, 1986, in Dunedin, to Steve and Sharon Clark. His effervescent personality made him unforgettable for those blessed to have known him. His ability to be outgoing and friendly allowed him to make friends quickly and easily, while his smile and enthusiasm allowed him to become the center of attention whenever he wanted. Big in stature and in heart, his Mother referred to him as her gentle giant. He was happiest when surrounded by family and friends. He enjoyed both boating and fishing, but again enjoyed it most with companions. Ryan was Baptized into the Catholic faith on 13 December 1986, at St. Michael’s Catholic Church, in Hudson. He was preceded in death by his paternal Grandparents Joretta and Eugene (Gene) Clark, his maternal Grandparents Jean and Willis (Bill) Thor, Uncles, Michael and Alan Thor, Danny Borick and Cousin Lori Borick. He is survived by his Father Steve Clark, Mother Sharon (Clark) Hady, Step-Grandmother Betty Thor, Brother Randy Clark, Sister-In-Law Samantha Oxendine and his Niece Paislee, along with Aunt Billie (Uncle Emory), Aunt Terry (Uncle Bob), Aunt Robin (Uncle Dave), Aunt Nancy (Uncle Mark) and Cousins Sean, Brian, Kacy, Kelly, Kari, Dana, Christian and Cole. Visitation will be held Friday, September 3rd from 5:00pm to 7:00pm at Grace Memorial Funeral Home (16931 Us Highway 19 North Hudson, FL 34667), with Funeral Service Saturday morning, September 4th at 10:00am, followed by interment in Grace Memorial Gardens. Ryan will be remembered fondly by those that truly knew him. Memorials (in lieu of flowers) to National Alliance on Mental Illness (NAMI) Pasco County, would be greatly appreciated. Donate (https://namipasco.org/) On behalf of Ryan, and his family, thank you for your kind consideration.

Mr. Ryan Eugene Clark, 34, of Hudson, passed away August 23rd of 2021. He was born September 15th, 1986, in Dunedin, to Steve and Sharon Clark. His effervescent personality made him unforgettable for those blessed to have known him. His ability... View Obituary & Service Information

The family of Ryan Clark created this Life Tributes page to make it easy to share your memories.

Send flowers to the Clark family.