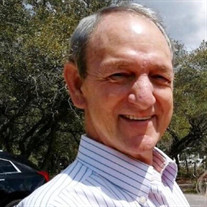 Norman C. Pritchett, 75, of Hudson, FL passed away on Tuesday, September 8, 2020 in Brooksville, Florida. Norman was born on February 23, 1945 to James, Sr. and Evelyn (nee Mansfield) Pritchett in Monroe, Michigan. After graduating from Monroe Catholic Central High School in 1963, he served four years in the U.S. Air Force during the Vietnam era. He was stationed in Pakistan and finished his service working as a draftsman. Throughout his career, Norman worked in the drafting and design field finishing out his career as a Project Manager at Schneider Incorporated. He then started a dog grooming and kennel business that he owned and operated in Indiana. He retired to Florida and was an avid golfer and all around sports fan. He enjoyed playing cards and building model Ford trucks. He is survived by his wife Mary Tsilionis of Hudson, Florida, daughters: Robin (Christopher) Harris, Aimee Pritchett, and Amber (Bryon) Burk; grandchildren, Emilie, Daniel, Kinsley and Harrison; brothers: James (Sally) Pritchett and Robert Pritchett; sisters: Patricia (Dale) Younglove, Mary (James) Henderson and Theresa Pritchett; nieces and nephews, Robert, Elaine, Lois, Sally, Laura, Michael, Kathryn and many great nieces and nephews. He was preceded in death by his parents and niece, Sarah. He will be missed by all who knew him. A Memorial Service will be held for family and close friends at 12:00pm on October 24, 2020 at Roselawn Memorial Park in LaSalle, MI. The Family has requested that donations may be made in Norman’s memory to: American Heart Association, 7272 Greenville Ave. Dallas, TX 75231 or by phone at: 1-800-AHA-USA1 or to: American Lung Association, 55 W. Wacker Drive, Suite 1150, Chicago, IL 60601 or by phone at: 1-800-LUNGUSA.

The family of Norman C. Pritchett created this Life Tributes page to make it easy to share your memories.

Send flowers to the Pritchett family.