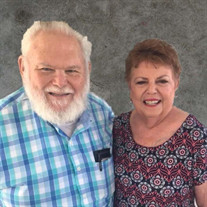 Harold E. and Myra L. Kulke Harold Edward Kulke, age 77, of Port Richey, Florida, passed away on Wednesday, January 27, 2021, at Medical Center of Trinity. Myra Lee Kulke, age 77, also of Port Richey, Florida, passed away on Thursday, January 28, 2021, at Medical Center of Trinity surrounded by family. Harold was born on August 17, 1943 in Beech Grove, IN to Walter P. W. and Norma Jean “Jean” (Harden) Kulke. Myra was born on February 6, 1943 in Columbus, IN to Austin Voris “Red” and Marguerite “Maggie” (Meriwether) Miller. They were married on July 19, 1975 in Indianapolis, IN. Myra had two children from a previous marriage, Alissa and Brian, and together, they had a son, Kurt, in 1976. After serving in the Air Force as a printer of maps and documents, Harold joined the Graphic Communications Union Local 17 and worked in the printing industry until his retirement. Myra worked as an accounting clerk for United Technologies Carrier Division in Indianapolis until her retirement. Later in life, she joined the Rodan & Fields Skincare company as a sales representative. Upon retirement, they purchased an RV and traveled the country before settling down in Port Richey, FL, in a community of friends who became like family (Ja-Mar North Travel Park) to them. For quite some time, Harold and Myra loved to dress up as Santa and Mrs. Claus and received so much joy from it. Harold was a very generous and philanthropic man. His involvement in the local community and non-profit organizations (Knights of Columbus, Sports Car Club of America, member of Elks Lodge and St. Michael the Archangel Catholic Church) allowed him to impact many lives and cultivate many friendships everywhere he went. He was a principled man who believed in doing good for those who needed it most. Harold found a love with his wife Myra that most will never experience, from writing love letters to supporting her through complete blindness. Married for 45 years, he was devoted and enduring through sickness and hardship. Harold was a simple man in love with an extraordinary woman. Myra was a radiant woman with a zeal for life. Filled with so much joy and enthusiasm, her vivacious spirit was infectious, and she never knew a stranger. Her joy for music and line dancing inspired her to create her own dancefloor anywhere she went. Myra’s resilience through blindness gave her the most beautiful perspective. She appreciated the little things and connected with everyone on a soul level, as she found that the outer appearance does not matter. Her seeing-eye, guide dog, Chloe, ignited a light in Myra and allowed her to regain independence and confidence in her later years. As such, she felt as if she was an unofficial ambassador for Southeastern Guide Dogs of Florida. Myra always marched to the beat of her own drum. She was a passionate soul who spoke up with boldness. She was determined to live a life filled with gratitude, laughter, and music surrounded by family and friends. Myra was also a member of St. Michael’s Catholic Church and Sports Car Club of America. Preceding Harold in death were his parents, Walter and Jean, and a sister, Carole. Preceding Myra in death were her parents, Austin and Marguerite. Surviving Harold and Myra are their children, Alissa (William) Sego, Brian (Wendy) Moore, and Kurt Kulke; grandchildren, Bryce (Caryn) Pruitt, Brayden Pruitt, Allyson Pruitt, Austin (Lauren) Moore, Kaitlin Moore, and Megan Moore; and great-grandchildren, Alexander, Titus, Theodore and a great-grandson due in June. Surviving Harold is a brother, Walter (Joyce) Kulke, and a niece and nephew. A celebration of their lives will be held at a later date. Memorial contributions can be made in Harold and Myra’s honor to: Southeastern Guide Dogs Inc., 4210 77th Street East, Palmetto, FL, 34221 (or online at https://www.guidedogs.org/make-a-donation/). The family would like to thank the friends and neighbors of the Ja-Mar Travel Park for taking such good care of Harold and Myra.

The family of Myra Lee Kulke created this Life Tributes page to make it easy to share your memories.

Send flowers to the Kulke family.