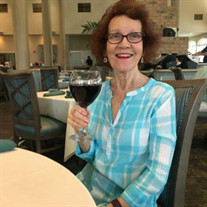 Kathleen Treacy Bainbridge was born in 1939 in an England gripped by World War Two. Having survived a bombing in London that left debris on her crib, she grew up in a large Irish Catholic family of seven sisters and one brother. Kate was determined to never let her voice be drowned out by the crowd. In her youth, she was an avid tennis and badminton player and quickly moved up the ranks at the National Bank of London, an achievement that was unusual for women at that time. Kate was well traveled and appeared on TV on more than one occasion, often to the chagrin of her family. When it came time to start her own family, she set off across the Atlantic Ocean with only her husband and young daughter to carve a new home in the United States. Kate loved being silly and laughed often no matter what obstacles lay in her way. She was a fierce protector of her family, a bold advocate for children with special needs, a reader to the blind, a spokesperson for public television, a fundraiser, a volunteer and a Master Gardener. Despite all these passions, Kate never stopped believing in her family and pushing them to take chances and live life fully. Kate traveled far and wide from ascending the Alps in a cable car in Innsbruck, to descending into Lenin’s Tomb in Moscow, to sailing down the Rhine, and dancing to the sound of the didgeridoo in Australia, to list just a few of her adventures. She lived a life well lived and passed away from this mortal coil on Thursday, February 10th, peacefully in her sleep. It would be too difficult to list the number of survivors in her life because for a woman who never met a stranger, would strike up a conversation with anyone, anytime, and readily invite them into her story with love and laughter, the world was her family. Kate will be missed terribly but we are comforted by the knowledge that she endeavored to make the world just a bit brighter with laughter, love and compassion with the time she had. She was loved by many and left the world a better place through her actions and selflessness. The family asks that expressions of sympathy take the form of memorial donations in her name to Botanica Wichita ( https://botanica.org/donate-to-botanica/ ) If you are unable to attend her Celebration of Life, you can attend her services via FuneralVue at the following link: http://webcast.funeralvue.com/events/viewer/69774

Kathleen Treacy Bainbridge was born in 1939 in an England gripped by World War Two. Having survived a bombing in London that left debris on her crib, she grew up in a large Irish Catholic family of seven sisters and one brother. Kate was determined... View Obituary & Service Information

The family of Kathleen Treacy Bainbridge created this Life Tributes page to make it easy to share your memories.

Kathleen Treacy Bainbridge was born in 1939 in an England gripped...

Send flowers to the Bainbridge family.