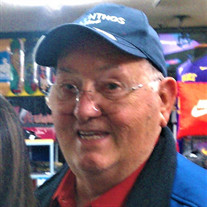 SOULIS, James 85, of Spring Hill passed away June 7, 2020. James is survived by his loving wife Rosamond Mary Linville Soulis; children James Alan Soulis, Paul A.S. Soulis (Alicia); Rosamond Lillice Soulis Czukkermann (Ronald); grandchild Alexandra Constance Rosamond Czukkermann; siblings Anna DeMarea, Freda Kyle, Samuel Soulis, Ila Marie Thome, and John Soulis; and many loving nieces and nephews. James was preceded in death by his brothers Constantine and Anthony Soulis. As James' niece, Deanna Frost writes, "James Soulis was born to a large Greek family in Kansas City Missouri. As a teen he learned auto mechanics in high school, while working at Scheffield Steel. After graduating from Manual High School in 1953, he was a Radar Specialist in the US Air Force from 1953 -1957. He returned to Sheffield Steel in 1957, and married my Aunt, Rosamond Mary Linville, in 1958. He continued to work while pursuing an education in electrical engineering, first attending Kansas City Junior College, then the University of Kansas. Go Jayhawks! After attaining his Bachelor of Science degree, he worked for many years on cutting edge aerospace projects at Hughes Aircraft and Honeywell Aerospace. In 1964 Jim and Rose welcomed their son Alan, the next year Paul, and the year after that, Rosamond Lillice. Uncle Jim was very gregarious and was loved by his extended family, friends, and colleagues. He adored his wife, was a very loving father who was proud of his children and "favorite granddaughter" Alexandra "Gussie" Czukkermann. His whole life he remained very close to his extended family, and was a larger-than-life figure to his numerous nieces and nephews. He had a huge heart, and has made an impact in many people's lives. He will be missed, but will remain in our hearts." In lieu of flowers, donations may be made to Holy Trinity Orthodox Church in Spring Hill or Christ the Savior Orthodox Christian Church of Spring Hill.

The family of James Soulis created this Life Tributes page to make it easy to share your memories.

Send flowers to the Soulis family.