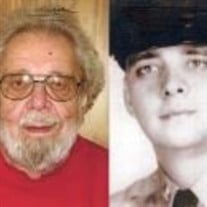 James R. (Jim) Pollock - Hudson, FL Former resident of Fitchburg, MA, Leominster, MA, and Greenville, NH, died July 5, 2021 at his home in Hudson, Florida. It is with great sadness that the family of James R. (Jim) Pollock announce his passing at the age of 81. Jim was born January 12, 1940 in Fitchburg, MA the son of the late James F. and Alice A. (Forss) Pollock. He was a graduate of Fitchburg High School class of 1958 and he faithfully attended his class reunions. He was a NASCAR fan and enjoyed traveling and camping at tracks in the East and Midwest; and was also an avid Boston Red Sox and Tampa Bay Rays fan. Jim was a US Army veteran having been drafted in 1963 and stationed with the 253rd Transportation Detachment at Fort Story, VA, serving during the Vietnam Conflict, attaining the rank of E-5 as Detachment Clerk and Supply Sergeant. He was honorably discharged in 1965. After his military duty Jim returned to live in Leominster and to work for Simonds Saw and Steel; Gould Industrial Supply; and Service Electrical & Industrial Supply. Moving to Florida in 1986, Jim worked for Jim & Slim's Tool Supply and from 1990 for Scottys Home Centers retiring in 2000 after a disabling injury. Jim was a 59 a year member and 51 year Past Master of Charles W. Moore Lodge AF&AM in Fitchburg; The American Legion and The Fraternal Order of Eagles in Hudson, FL. Jim leaves his two sons: Robert D. Pollock and wife Christa L. (Cooley) Pollock of Lexington, KY and their sons Mason A. and Maxwell C. Pollock; Steven W. Pollock and wife L. Paige (Johnson) Pollock of Tuscaloosa, AL and their daughters Lucy A. (Pollock) Thome and her husband, David; and Mattie A. Pollock; along with his former wife and mother of his children, Mary Anne Pollock of Lexington, KY. He also is survived by several cousins and many special friends. Jim was a free spirit who lived his life his way no matter what anyone ever said. He never met a stranger and his kindness and sense of humor endeared him to all. A loving son, father and friend with a unique spirit and gentle soul who cared for everyone in his life. He will be remembered for his sarcastic sense of humor as he always enjoyed a good joke. Family and friends were quick to learn that the more he teased you, the more he loved you. Per Jim's wishes cremation was in Florida and there were no funeral services. His ashes will be spread in private by his family at a later date. In lieu of flowers, donations in Jim's name may be made to Shriner's Hospitals For Children at [email protected], by phone (855) 401-4897 or by mail to Shriner's Hospitals For Children, 2900 Rocky Point Drive, Office of Donations & Development, Tampa, FL 33607-1435 Grace Memorial Gardens & Funeral Home, 16961 US Highway 19, Hudson, FL assisted the family.

The family of James R. (Jim) Pollock created this Life Tributes page to make it easy to share your memories.

Send flowers to the Pollock family.