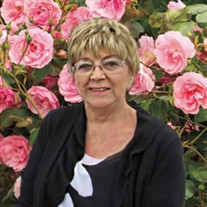 Kay Williams, 79, a ‘sunbird’ residing in both Hudson, FL and Lavallette, NJ, passed away peacefully on October 23d in the company of her husband George and loving family members. Kay was born in New York City on March 16th, 1942, to Patrick and Ethel Conlon. A native New Yorker, she grew up on the upper west side of Manhattan on 90th Street. In 1963, she met her future husband, George, while working at the Morgan Guaranty Trust Company. They were married on October 1st, 1966, and enjoyed a long and happy 55 years together. Throughout her life, Kay was loved by many special friends. She was a treasured member of The Roadies, a group of amazing families with roots in Waldwick, NJ, who have remained close and shared memories for almost 50 years. In 1984, work led Kay and George to Rutland, Vermont, where they spent 16 years enjoying New England life. In 1996, they bought a second home in Lavallette, New Jersey, reuniting with many of the Roadies and embracing beach life. In 2000 Kay and George retired, left Vermont behind, and became some of the earliest residents of the Heritage Pines Country Club community in Hudson, FL. They enjoyed more than 21 years together as ‘sunbirds’, spending summers at the NJ shore and the rest of the year in Florida. Kay loved to travel and see new places. She and George traveled the world seeing many places including Paris, Rome, Athens, London, St Petersburg, Ireland, Scotland, Egypt, and most of the 50 US States. She was also a champion bowler and golfed with the Heritage Pines Niners. She worked a variety of jobs and supported many volunteer activities throughout her life, but her greatest joys were always found in spending as much time as possible with her family and friends. Nana was adored by her grandchildren and she loved spending time with them. Kay is survived by her loving husband George of Hudson, FL and Lavallette, NJ, son Wayne and his wife Chanda of San Antonio, TX, son Donald and his wife Ann, of Northbridge, MA, beloved granddaughters Livinia, Abigail, and Catherine, and grandsons Luke and Benjamin. Kay is also survived by her older brother Tom and his wife Sheila, of Bethlehem, PA, her sister-in-law Joanne of Clearwater, FL, and many loving nieces, nephews, cousins and friends. Kay was preceded in death by her parents and her brother Richard. A funeral service will be held on November 20th, at 10:00am, at Grace Memorial Gardens and Funeral Home, 16931 US Highway 19 in Hudson, FL. A funeral mass will be held at a later date (TBD) in New Jersey. If you are unable to attend services in Florida, you may view a livestream here: http://webcast.funeralvue.com/events/northstar/63870/hash:D1E086362FBF29CD

Kay Williams, 79, a &#8216;sunbird&#8217; residing in both Hudson, FL and Lavallette, NJ, passed away peacefully on October 23d in the company of her husband George and loving family members. Kay was born in New York City on March 16th, 1942,... View Obituary & Service Information

The family of Catherine Mary "Kay" Williams created this Life Tributes page to make it easy to share your memories.

Send flowers to the Williams family.